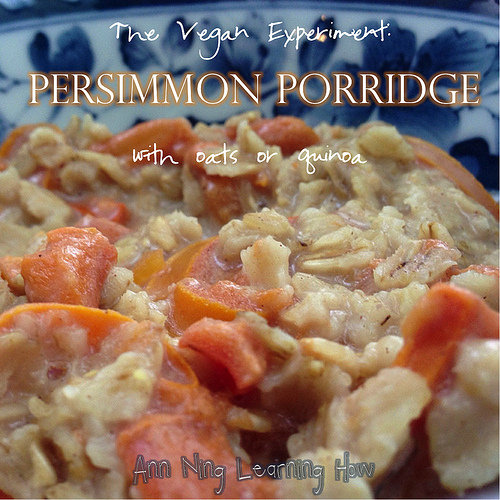 Aren’t you astounded that this recipe does not include a banana?  Don’t get me wrong – I love bananas, especially in porridge.  But there was only one lonely banana in the kitchen and I wanted to save it for a smoothie later (unless Tanpo finds it first – I’d be totally fine with that).  But we have several persimmons – YAY!  And persimmons lend themselves nicely to my new self-imposed fruit-cooking criterion.  In fact, they made such a nice bowl of porridge that I made this two days in a row.  This morning will likely be 3.

Bring to a slight boil

Simmer on low, stirring occasionally, for 3 minutes.  Turn off the heat, cover, and let cool for a few minutes while you do something else.

Optional, if using quinoa:  after it cools a bit, mix a heaping teaspoon of arrowroot with a little of the heated milk.  Add back into the porridge.  Simmer, stir and cool again.  This part is optional of course – I just wanted mine to be a bit thicker.  You could try cornstarch or omit it altogether.  The oatmeal does fine on its own.