Here’s a more recent picture.  All my children have been taught to handle a lightsaber.  In Ernie’s family they start young. 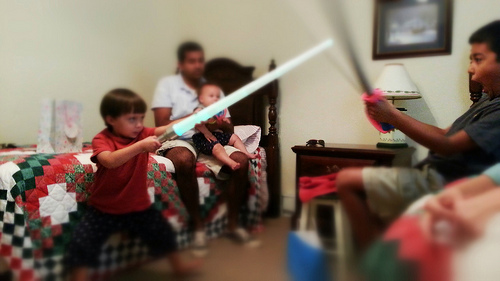 My parents and I were still making our way up to GWH last weekend so Ernie sent us this picture so we knew what was going on.  I love the expressions on the boys’ faces – Ezra and Josh are both really intense.

Thankfully, in the real world, they aren’t fighting against each other.  I pray that they will always be the fast friends and strong allies they are now.  As I’ve watched my siblings raise “my children” over the past decade I’ve often heard them point out that you have to “pick your battles.”  True.  We learned that in school, too – save your energy for gaining the most important points.  It’s also true that you have to be good at identifying friends and enemies.

When I woke up my notion of “who’s on my side” was completely upended.  Exceptions:  Mommy and Ai Ai – I was sure about them.  My poor Daddy kind of existed on the periphery for me.  (Sorry, Dad.  But in my defense, when Dad had his heart surgery in 2009 and had a really tough time waking up, he just wanted Mommy, too.  Ask Ruthie – she knows.) I knew I loved him but I wasn’t 100% sure about his role in the scheme of my illness. I hadn’t been awake when Ernie and Ruthie were there so they only existed in dreamland for me.  Now I understand.

Generally speaking, if you’re blessed to be part of a well-functioning family unit, you are playing on the same team.  I learned the concept of “I’m on your side,” from my cousin, Vt – I think it’s such a good concept – it’s so basic, and one of the first things I wanted to know when I woke up.  It would have been a lot easier if people had been wearing big signs that said, “You can trust me” around their necks.  (Assuming I had been able to read.)   One of my first bosses, S, said that he always wanted to see evidence of a person having played a team sport before hiring him/her.  This “team US” mentality takes precedence over the personality/verbal tics that pervade everyday life – no matter what you are joined in forwarding a common purpose and are bound by love, blood, and/or adoption.

It took me a long while to decide on how to view the people around me in the hospital.  When I was busy saying, “help me,” either in my head or out loud, Mommy explained that all the folks around us in scrubs were there to help me.  It still took me a while to believe her.  At first I had all these theories about my food tube being improperly supplied, which was why I was having digestion issues, and then when I could go to therapy I was quite sure I was going to die during PT and it was all a conspiracy.  But no, these people were all just trying to help me out, and I needed it.

When I left OHSU (1st Hospital) I was still asleep so I didn’t know anything.  When I left Vibra (2nd Hospital) I was nervous all morning and scared because I had gotten to know that the people there were kind and caring, and for some reason I needed special assistance.  I tried my best to repeat the list of their names in my head at night so I could write proper thank-you’s later, but the list got too long, and remembering lists is not my forte at present anyway.  My admitting nurse at RIO (3rd Hospital) was so nice to me I felt at ease immediately, which was just what I needed.  After establishing that the RIO staffers were indeed real and not crazy/imagined people I gradually understood that they were helping me as much as they could so I could go home.  When it was time to go home I cried (not too obviously, I hoped).  I’m still rather broken up about it.

When I left The Place (Shady Grove ARHM, 4th Hospital), I was heartbroken bc I was like, “Ummm… helloooo – Clearly I’m not all better yet.  Please don’t leave me like this.  I don’t want to be like this forever.”  But now I get it – sometimes my body just needs time to stew and incorporate all the things I’ve learned before I can move on to learning new things.  Now that I’ve left NRH (5th Hospital) I’ve progressed to the mental/emotional point that allows me to be sad, but to also look ahead with confidence.

I’ve seen a LOT of medical professionals over the past 2 years.  My life is different, and better because of them.  I mean, really – not everyone can point to the person who taught them to walk (as an adult).  When I went to NRH about a year ago I asked the Lord to send me to the right PT.  He gave me J (29) and then M (37).  WOW.  As I anticipate moving to a new rehab gym I know that hordes of people have been a part of my recovery, but I only really need One on my side.  I am confident that He’ll continue to arrange everything perfectly.

Romans 8.28
And we know that God causes all things to work together for good to those who love God, to those who are called according to His purpose.