I’m going on Spring Break. I intended to go on a blog vacay in April to celebrate Ed’s 83rd Birthday (Light the tikki torches!! It’s the 3rd anniversary of my injury), but push has come to shove and I’m taking a break before schedule. I’ll be back online in mid May, but we’ll see if I can hold out that long – I might come back sooner.

I love it when people break down instructions so I can isolate what I really need to concentrate on. For example:

There are many issues competing for my attention lately and while I have been an excellent multi-tasker in my Old Life I am unable to do so now. It took over a year for me to be “allowed” to talk to my therapist while walking bc this is considered “multi-tasking” that you’re supposed to work up to. Or at least I was supposed to work up to it bc I was deemed to be such a new walker I needed to resist the instinct to chat and focus on not falling.

But now I understand the wisdom in paring down goals. I’m losing steam over here so I’d better streamline this gig so I can basically just breathe. Okay, it’s going to be more complicated than that, but that’s all the more reason for me to weed out things that can wait. I love writing, and have at least 2 additional weeks of posts in my head, but getting them on to my computer is hard, and I should really attend to some other things.

So I’m signing off for now – please pray that I’ll do what I need to do and will enjoy Ed’s Birthday. I’m going to leave you with my favorite “breathing” post:

I never told you the story behind this picture:

We visited E&R a few weeks ago and got hit by a snowstorm. It took us 2 hours to get home from church. It took S four hours. After the meeting was over I looked out the window and wanted to cry because what had been a few flakes had turned into significant accumulation. But then snow started to fly signifying that Uncle M was already outside shoveling the sidewalk and spreading salt. When it was time to get in the car he appeared at my other elbow. When we got home after a LONG ride the police had already shut down the road outside E&R’s house but let us through when Ernie pointed to his house and promised that we really weren’t passing through. Then we got stuck on the driveway. I borrowed Ruthie’s Wellingtons and then Ernie and Tanpo helped me on either side so I didn’t fall.

PS I had totally forgotten Leo at home that weekend. Good one, Ann|Ning. I don’t forget Leo anymore because I’m supposed to be practicing having good form, and for now I need Leo for that. We all know I can get from point A to point B without falling (most of the time), but this is no longer laudable. I’m supposed to be concentrating on the 10 tips, specifically the hip rotation and the narrower stance. 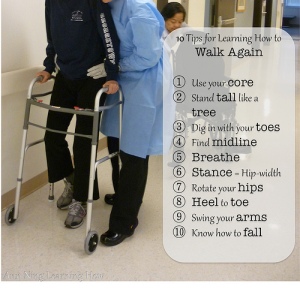 The point is that this was the first time I walked in significant ice and snow, and I was scared. But I had some help from my friends, and I made it!

This goes back to my assumption that “there will be enough grace in that particular moment for everything I need.” A few weeks ago I wrote about how I’m going back to my hospitals in Oregon to say “hi” and “thank you” even though it freaks me out because it’s the right thing to do, but I am just saying that I’ll need a Divine infusion of grace when it happens because just the thought of it makes me feel ill presently. But I got encouraging notes from many of you (thank you!) and I’m still moving forward (mentally) with this plan.

It’s time for me to share two more examples from The Hiding Place by Corrie Ten Boom. She’s the Dutch lady whose family got caught hiding Jews in their home (and/or were involved in the Resistance) during WWII and then several family members were sent to concentration camps. As a child, Corrie saw the dead body of a baby during a visit of condolence and was so disturbed she cried all night. Corrie, her father (who would later die in a Nazi camp) told her, When we ride the train, when do I give you the ticket?

That’s right, her father continued. And this was like many things in life, he explained. Oftentimes the knowledge of these things is too heavy for us to carry in advance. But we trust that our Heavenly Father will give us what we need when we need it.

Corrie illustrates this with great power later in the book when she describes meeting one of her former captors at a speaking engagement in post-war Germany. I wasn’t able to find this in the book with my inadequate Kindle search skills, but thankfully it was readily available at PBS.org here.

She was speaking about the power of God’s forgiveness and a man made his way to the front. He was in civilian clothes but she immediately recognized him from Ravensbruck and the old shame, anger, and bitterness welled up inside her. He had since become a Christian, however, and wished to ask her to forgive him since she had mentioned Ravensbruck in her talk and he took the opportunity to ask “Fraulein” (he didn’t recognize her) if she would forgive him for his past actions.

She couldn’t do it. Even though she was busy preaching about God’s transformative power she was too taken with the memory of suffering, particularly her dear sister Betsie’s suffering and death, to see straight. But she prayed for God’s help and said, Lord, I can lift my hand – I can do that much. You must supply the feeling.

So she lifted her hand to shake the former guard’s, and when she did she felt what was like an electric shock run down her arm and the current transfer into his. God had indeed supplied the grace she needed at that moment to be living proof that the Cross really does transform. “I forgive you, brother,” she said, “With my whole heart!”

This illustration of living grace has stuck with me for years. I feel “lighter” just thinking of it – talk about discarding baggage. When human forgiveness is impossible, nothing is impossible with God – and His forgiveness brings sweet freedom.

I learned in Speech Therapy about breathing techniques. Most people don’t have to think about breathing and speaking simultaneously, but people like me often get tripped up between the two and end up using “residual air” to keep on talking even though they’ve run out of gas. K exaggerated the breathing process for me so I could see her appropriate intake and usage of oxygen to say what she wanted to. “See?” she illustrated. “You take what you need.”

That’s my plan. Every day I’m trying to take what I need. Like air when I’m speaking, it’s not like I’m ever in a situation where oxygen is in short supply – I just need to practice accessing it appropriately. I’m also working on the assumption that God’s grace is unlimited so there will be no shortage when I access those resources. I just need to practice having faith that I will receive what I need when I need it.