This was one of those “oops” I didn’t know I took a picture moments.

I used to walk really fast. I think I picked it up from Mommy and Boo Boo who hustle like we’re running a race. It was noted at my first job here in D.C. I always wore heels (strangely more comfortable than flats for me) and would stride around the office with great purpose and rapidity. I’d routinely walk a mile across the White House to Old Ebbitt or another restaurant in 3-inch wedges. I miss those shoes, BTW. But they were getting super old and tired. Uncle Joe had to perform emergency surgery on them once or twice (he was a ninja cobbler).

I retained the walking speed thing when I moved to Oregon. I ran into a friend while I was washing my hands at church one morning. She had just seen me booking it through the parking lot. You always look like you’re in a hurry, she laughed.

It was a humorous comment – she didn’t mean anything by it – but I remembered it well enough to mention it when I was babbling at Vibra (2nd Hospital) and she came to visit me. There’s no reason for me to be doing that, I told her from my side of the bed railing.

I instinctively knew that hurrying was not the mindset I wanted to cultivate nor the image I wished to present to the world. To me it was a mark of my earlier life – when I was bustling around, getting stuff done, absolutely convinced that if I just woke up a little earlier I could accomplish it all. (PS. I subscribe to the discipline of early rising but FYI you can’t get it all done. Don’t be taken in by this fallacy.)

That’s how I made friends with the night security guard at my Parking Garage on 17th. She’d see me going in and out at odd hours so we’d chat it up. You know you work too much if the same person’s on duty when you arrive in the morning that you said goodnight to a few hours before. Another indicator is if your toothbrush is still wet from the prior night’s brushing. Not good signs.

A message by Chip Ingram on how to cultivate humility voiced the idea clearly. One of his strategies was to “ruthlessly eradicate hurry from your life.” Not kidding. The man would intentionally pick the longest line at the grocery store.

I used to get so frustrated at Winco, my local discount grocery store in OR because one of their cost-saving measures is to only offer carts – no baskets. I’d inevitably get stuck behind some poor woman intent on examining EVERY can of beans on the shelf in Aisle 8. I’d be seething, wanting desperately to just make my way to the bulk food section, thinking, No really – let me help you make this purchase decision. You want those beans. RIGHT THERE. It’s really not complicated, I promise. 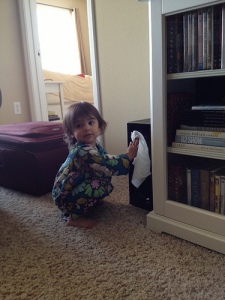 See? I told you I was saltier than I ever let on before. But the difference now is that I won’t just think that. I’ll say it. And then Mommy will apologize on my behalf. (Thanks, Mom!)

So my workaround then was to bring my own basket. I actually have several nice baskets but they’re in storage. I can’t really tote them around anymore but maybe Mommy could use them. We’ll see.

Nowadays, though, I understand that no one’s going to die if the lady in Aisle 8 wants to weigh her bean options carefully before settling on a particular can. I am also familiar with the sting of not being able to hustle. I’ve almost been run over at the store before bc I can’t get out of someone’s way fast enough and have also said stuff like, “I’m so annoyed,” if I’m really tired and I can’t pull it together like I used to. My former method was to just muscle through the timeline of whatever was on my plate by brute force. Maybe that was never great for my AVM, but the fact that it ruptured (catastrophically) eliminates the option of me muscling my way through most if not all things now. Yes, I’m learning to exert myself through breathing, using my vision and muscles differently, but this is aimed at momentary necessities like, Don’t throw up, or Don’t fall down. But I can’t pull all-nighters like I did in school.

But I’m going for the type of existence where all-nighters aren’t necessary. There has always been enough time in the day for me to get the things done that God wants me to do (including rest). That was true before I got sick, and it’s true now.