If you want to work out but are intimidated by the fact that you’ve never done it before, join the club. I never lifted weights, EVER, in my life until I became disabled. I suppose you could say I “worked out,” but only if you used the term very loosely. My overall lifestyle was healthy (Mommy says this was likely a large contributor to my survival), although it was largely unintentional. I just enjoyed being outdoors more in OR than in the DC area, and my walking partner/cubicle neighbor spurred me on to greater physical activity, so I ended up quite liking trotting around my neighborhood or the loop around work (~4 miles – seems like a marathon to me now).

The 10s video above is from OT. I’ve seen this at a couple of hospitals –you can wheel your chair right up to the weights and pump some iron. I did so because I was into following instructions like an automaton at the time. Well, almost. On my last day at RIO, A (2) was giving me some exercises to do and he said enthusiastically, “Let’s do some squats!” 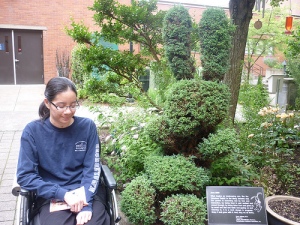 By then he was accustomed to the snickering/chortling that used to come from me as I sat in my wheelchair and was confronted by lots of funny things in this really strange Rehab World. When he asked why I was laughing I was like, Ummm….I don’t think I could do those in my normal life.

“You can do these,” he assured me, and proceeded to demonstrate. I sat back in my chair like, That’s right, buddy – you go ahead and take your time demonstrating. I’m jes gonna set a spell. It seemed to me that A was done really fast and I was soon out of my chair, clinging to a bar and doing mini squats.

When I got home, A (6) quite liked the idea of me lifting weights at The Place. I did my duty on several machines and got used to being careful when putting the weights down – “I don’t want to hear those weights clanking!” When it was time for me to be discharged I bought a Total Gym (you know, that thing on the infomercial with Chuck Norris and Christie Brinkley?) because A had been verifying that I had access to appropriate exercise equipment. I figured I would much rather exercise at home than become a gym member at The Place, so I ordered one and JLSS and JPAS set it up. (Thanks, guys!)

I named him “Ned” and worked out on him faithfully for a few months until my leg started being super uncooperative. Ned fell out of favor when I was doing single leg squats (See? I totally do squats now) and when I switched to my left leg it hurt like anything. Plus, it’s kind of hard for me to change the accessories (e.g. pull up bar vs. ab wings) unless it’s only on the 1st level of resistance. And that’s boring.

The Total Gym was originally born in a rehabilitation environment, so I felt confident in purchasing one. I saw one this summer at The Gym – ratcheted up really high – it looked almost perpendicular to the floor to me. “Do people seriously work out on that?” I asked. Oh yes, they did. They were mostly doing squats, so I felt better. Many of the clients were very high functioning so it didn’t seem too crazy for me. I also thought it was funny that the industrial version has a giant foot board, presumably so you don’t miss it.

I had a really bad headache on Sunday afternoon. These things still happen but I mention them less since I’m more used to them and am confident in my neurologist’s assurances that my MRI is clean and nothing is amiss up there. I honestly think it happens when I get too excited about life and don’t rest enough. So right now as I enjoy this extended Therapy Vacay until my insurance changes, I’m going to concentrate on eating, sleeping, and exercising at the right times. I have been doing some variation of this for the past year, but not consistently. Things got crazy with acupuncture, VT, Pool Therapy, Land PT, and other random appointments 5-6 days a week. So it’s nice to have a little season of rest.

I got reacquainted with Ned this morning and I’m sore as a result. Not shaking sore, like when I’d see A(6) and T(9), or when M (37) decided we should do lots of tall kneeling, but just enough for me to know that there’s a definite difference between my left and right leg, and that both need work. It’s 5.42 pm right now. I have 18 minutes to finish drinking my last bottle of water. I generally try to drink 3 of my 24 oz bottles a day. A nurse told me at RIO (3rd hospital) to try limiting my drinks after 6pm. This is especially important if you have a mobility issue since getting up in the middle of the night is SO not optimal. So I generally consider myself “off duty” after 6. Days are generally front-loaded for me. I have more energy in the morning so that’s when I cook, bake, go to therapy, go grocery shopping, exercise and drink as much liquid as possible. I often exercise or write after 6, but I’m trying not to. Let’s just say that I’m working up to that point.

I have recently been concerned about incorporating more strength training into my routine. People say you don’t want to overdo the cardio – you should build some muscle mass so your body is strong with calorie-burning muscles. Now I don’t think I’m at risk (or that I’ll ever be at risk) of doing too much cardio, but I would like to be stronger, especially because both A and M had me using machines at PT and I think it’s a good thing to do. So Ned is officially back in favor. I just need to figure out the list of exercises I’m going to do so I can minimize the need to change the accessories. In fact, I’ll do that now and ask Tanpo to print it for me. (I don’t have a printer in my room and it’s hard to navigate the computer/printer set up downstairs so I generally ask Daddy to do it. He’s very obliging about it.) Yay!! It’s time for Smart Art!