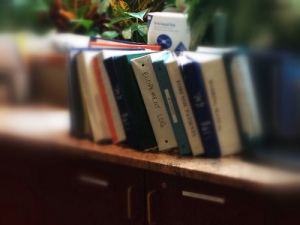 Did you know I’ve tried to elope?  To review, to “elope” is the technical term for trying to escape from the hospital.  A(6) taught me this word when he was teaching me how to walk (we covered lots of ground during PT).  When I thought I was stuck in a dream at RIO (3rd Hospital) I found myself alone in my room for a moment since I had asked Mommy to go take a stroll and stretch her legs since it was a nice day.  I forgot where Daddy was – so I looked around and then started to wheel myself out the door.  I had no plan, really, I just had a vague notion that I’d play it by ear.  I realized, however, on the off-chance that this wasn’t a dream I did not want to leave my parents in such an awful situation and at that moment Tanpo appeared in front of me having gotten a drink from down the hall.

“Taking a walk,” I answered meekly, and rolled myself back into my room.

I did not tell him what I was doing at the time, and I’ve never done it again since RIO was my last inpatient hospital so I haven’t lived in a hospital since then/had the desire to elope.  Apparently it’s very common behavior, though.  I spied a 3-ring binder on the security desk at Planet Rehab one day called the “Elopement Log.”  I asked the guard if it’s really necessary to have such a big binder– and yes, it is – people try to walk/wheel out regularly.  I guess they have to write that sort of thing down so everyone knows you’re a flight risk.  No one ever knew about my failed elopement at RIO (although A (2) made a joking reference once to escaping and I was like, I already did that :)), so after I face-planted  signs went up saying “Fall Risk” but there was no mention of flight risk.

I did hear a story of a former patient who successfully eloped.   The nurses didn’t know because he had somehow managed to get his tracker bracelet off of his wrist (they found it in the trash).  He then wheeled himself home, several miles away.  I’ve thought of that story for a long time now, and it’s like, WOW – that takes a lot of determination and forethought.  Talk about a wily coyote.  That poor man must have been so confused – he just wanted to go home.  I know that feeling.  And I find no fault with the hospital staff – we were at a rehab hospital – you can’t lock patients up like prisoners and the man ripped/cut off his tracker bracelet.

Since I know the kind of stunts I pulled I sympathize with those in charge.  After the face-planting incident I had an alarm attached to my wheelchair seatbelt and there was one built in to the hospital bed, too.  I was always in one or the other, and set both off accidentally.  People would come running from every direction.  I guess they knew from experience that I might be up to no good.  Heh heh heh.  I got tired of the seat belt alarm within a week, though, and since I was still in dreamland, I asked A (2) several times if we could remove it, kind of like how I pestered my Doctor to remove my PEG (food tube).  Every time, though, the answer was “no.”  Since he was the one who found me the day I fell maybe I was asking the wrong person.

I live in RecoveryLand as an outpatient now so there’s no need to elope.  The whole experience, though, is made more enjoyable by other people who live here, too, or are just random bright spots in my day.  That’s why there’s no need to escape:  I enjoy the bright spots and laugh really hard at them.  As Boo Boo says, I’m in it to win it!  And this is my strategy of choice.

A couple of examples – there are many more, but I’m just going to kick off the weekend for you:

The last time I was at Pool Therapy there were several of us in the water.  A tech walked by and a lady near me called – Come on in!  We only need one more for synchronized swimming!

I walk at the track (with appropriate water and sitting breaks) while Ai Ai goes to exercise class (YAY, Boo Boo!!  I’m so proud).  The track is on the 2nd floor of the gym, and a basketball camp is being conducted below.  Sometimes I’ll see her magically appear in the doorway to check on me as I round the corner – I can give her a thumbs-up from far away and she knows I’m fine.  A couple of older gentlemen are there regularly and make sure I’m okay, too.  On Wednesday one of them was like, You wanna go shoot some hoops later?