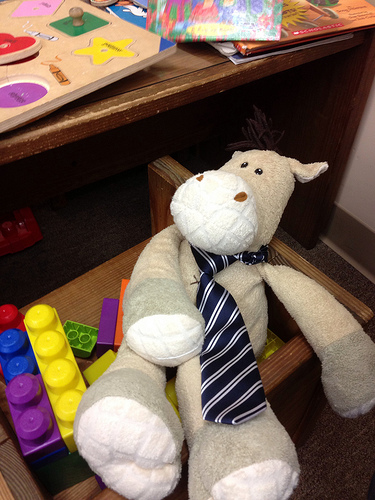 Ed in the waiting room.

…but I didn’t enjoy it quite as much.  My ENT/PDG is very nice and all and told me it was okay when I told him I knew I was supposed to go back and see him over a year and a half ago, but I never did because I don’t like being poked.  I was right to be wary of the scoping.  Mommy told me she head me whimpering while he was looking around.  Evidently there was something worth looking at since the scoping took longer than I had anticipated, I had to make lots of different noises (I considered it a bad sign that the only noises I could produce were at least a full octave lower than my doctor’s), and he kept on moving the camera thing around to look at different angles.  It was gross, and my greater usage of my left eye (thanks, VT!) let me see the scope being pulled out of my nose and I couldn’t suppress a “yuck.”  I immediately apologized for being a sissy, but my PDG was cool.  Then he told me the cyst is still there, plus the right vocal cord looks weak, so I’ll need surgery.  He gave me a referral to a vocal surgeon and I’ll  book an appointment with him.   My next question was, “What’s the urgency on this?”  YAY!  It’s not like this needs to be taken care of tomorrow.  I’m going to enjoy my Summer Vacay as planned :).

Thank you for your prayers and well wishes for this appointment.  I know some of you, including Tanpo, get scoped regularly and face up to it as part of your healthful duty.  Good for you!  I’m  not as brave about this kind of thing.  A few weeks ago Mommy and I were in the car and I go, “Hey, Mommy – can you believe I had brain surgery?”  We both laughed – because it sounds ludicrous.  Well, the thing is that I was asleep for such a long time after the surgery, it really didn’t hurt!  The pain I felt was not in my head – it was in other parts of my body.  Sure, there were lots of symptoms to get used to, but I’m so thankful I had no notion that anything had happened inside my skull.

The fact that it’s been 2 years since my injury and I’m all kinds of cognizant made me more anxious about today’s appointment.  I had no idea there had been an ENT at my surgery.  The first time I got scoped was when I was still an inpatient at RIO – I looked at the trees rustling in the wind outside the window, utterly convinced that none of this was real, and planned to ask a nurse to get someone to wheel me back to my room if I got bored.  The second time I got scoped I was home (July ’11) but still incredulous.  When the PDG asked, So what brings you in today? I just waved my hand in Tanpo’s direction and said, Daddy explain – because I was still intent on hearing different people explain the situation to see if their stories matched, and it was Tanpo’s turn.  This time, though, I knew what was going to happen and I was right – it was yucky.  Admittedly, though, I’m a wuss.  Yuckiness might be the worst of it – plus I’m more conscious of my gag reflex now, but with an ENT standing right there I knew I would be okay –  I was just grossed out.

P suggested that I  consume ice cream after my appointment to celebrate getting this done.  I love that idea and think I might enjoy some chocolate “fro yo”  I made later (frozen bananas, Greek yogurt, cocoa and PB2).  But right after the appointment Mommy and I had some lunch and I enjoyed this treat instead: