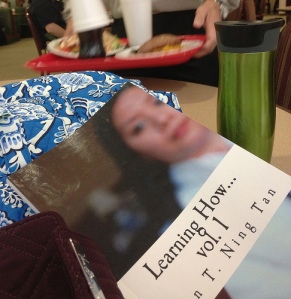 This is a pic of I posted on FB this week. (We’re at lunch after PT.) My “Memoirs” do exist, I promise.

Have you noticed the milestone counter in the sidebar of my blog? It counts the days until Ed’s Birthday (the 2nd Anniversary of my injury). Sigh. 2 years ago (right before I got sick) I think I was still in Maryland (I had just returned from Africa). I telecommuted for a week and then flew to Portland. I think that probably added to the shock factor of my bleed – many people had just seen me happily bouncing around the metro area and then all of a sudden they got an email/text/phone call saying that I was sick.

It’s hard for me not to be a little blue this time of year. This sadness took the form of high blood pressure last year, and an increase in tummy aches for poor Ed this year. Ed has also recently developed a food allergy (to marshmallows). This is difficult for him since he enjoys building bonfires in the backyard and making s’mores. But he, being a resourceful horse and an excellent chef, is researching marshmallow workarounds. I am sure he will have perfected a recipe by the time it’s his birthday.

Meanwhile, I’m busy trying to encourage myself in the Lord. That phrase always fascinated me in I Samuel. The instance I have in mind is when the people were about to stone David but he “encouraged himself in the Lord his God” (I Sam 30.6). To me the phrase has always suggested a good amount of intentionality on David’s part. I figure if I’m having a pretty rough time of it I have to plan to be encouraged by what I read, watch, think about, etc. – I shouldn’t just slog through the day, hoping to be surprised by encouragement. (Side note: sometimes these surprises do happen – I’m just saying that I don’t bank on them.)

One of the hardest parts of my situation is learning how to go with “Plan C” even though I don’t know what the end goal looks like. Let me spell it out for you: Plan A was Africa. Plan B was the “American Dream.” Plan C is this.

No one ever dreams of this. Wait, I take that back – some people do dream of walking. I know I used to. I had one really good dream when I was still at RIO (3rd Hospital) – I dreamed that I could use a walker and was free to walk over to the bathroom whenever I wanted.

So I should clarify and say that since I learned to walk (albeit uglily) I never dreamed of living like this. A couple of days ago I cried as we left acupuncture and I stared down the long ramp, thinking it was a metaphor for the longness and sameness of my situation. “Mommy,” I said, “When I daydream about what my life is going to be like I imagine myself as able-bodied, but I don’t think that’s going to happen.” |Sniff, Sniff|

Well, actually, I guess it depends on the definition of “able-bodied” and we’re going to have to wait and see the degree of recovery the Lord grants me. In the spirit of encouraging myself I’ve been thinking of something I wrote in December:

Also, here’s an excerpt from Learning How to Wait – the 2nd part of my “Memoirs” in which I talk about Ed’s 2012 Birthday Bash. The invitations I sent to my siblings had “Be there or be square” scrawled across the top. I’m sharing it since the 5-Minute Rule helps in many stressful environments.

As I thought about everything I missed about my old life, I just wanted to pull the covers over my head and cry. Soon after we came home I had told Mom that I had considered holding my breath until this was all over, but didn’t think that was going to work since I had read somewhere that if you held your breath too long your body would automatically knock you out and start breathing again as a self-defense mechanism. She agreed, that it wasn’t going to work. What I decided to do, then, was to resurrect the 5-minute Rule. The 5-minute Rule had been helpful to me a few years before when I was stressing myself out at work, so I knew it would help again. It’s really quite simple – sometimes surviving the next hour can seem overly daunting, but a five-minute increment of time is only a very short while that you need to keep on breathing. So I took the time in 5-minute increments, and did pretty well.