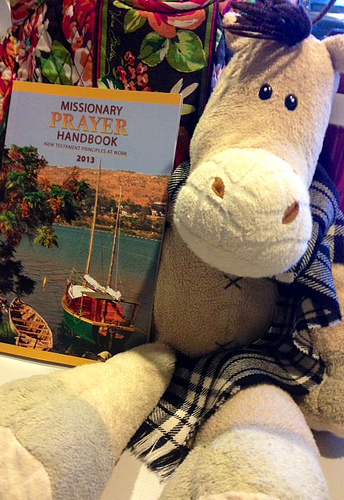 I was staying at ChezJ in March 2011 when JJ’s Dad called (they work in a neighboring country) and told him that their recently completed ship, “Wings of the Morning” had been badly smashed up in a violent storm on the big lake. A couple of years of work had been destroyed. I have zero sailing experience and I have no idea how Mr. J&Co. managed to build something like that in the first place, but I felt the disappointment deeply for them anyway. When I woke up in the hospital, Mom brought me a copy of the latest Missions magazine and I was troubled to find a letter in the back from the J’s, telling of the ship’s demise. I was troubled because I knew the story to be true, so this was a piece of evidence in favor of reality.

Well,they rebuilt. 😊
And now you can see the new vessel (in a nice shade of green) on the cover of the new Missionary Handbook.