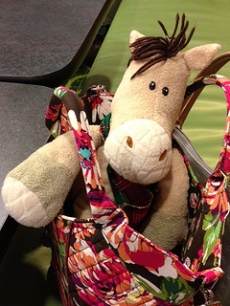 This is Ed at breakfast at the hotel last week. There were no pancakes, but there were waffles!

A few months ago Ruthie and Ezra were negotiating what Ez would eat for breakfast.  Ezra asked for pancakes, but Ruthie told him there were no pancakes that morning.  Ezzie just said, “Pancakes” in a low gravelly voice.  He wasn’t shouting or anything – it was as if he was saying the word hoping pancakes would magically appear on the table.  (They didn’t.)

I have one more pancake/kid story to tell. Back in the day when M was the only K grandkid she spent the night at the K Classic’s house.  In the morning I think she was in her high chair and Mrs. K was there hugging her or doing whatever Grammies do.  M felt like the time for cuddles had passed and it was time for breakfast.  So she said, “Maybe Teta/Grandma can go make me some pancakes.”

I love that story.  Not only does M’s dismissiveness crack me up but the thing is that I’d rather eat pancakes than a whole lot of things, too.  I ate a lot of pancakes in the hospital (once I was cleared to eat).  This was after I experimented with ordering things like eggs or oatmeal, but I found that the pancakes were most like what I was expecting.  (Unlike that “hateful” omelet – it might have been fine when it left the kitchen downstairs but after a ride in that amazingly hot food cart it was hard as a rock.  Plus I think we filled out my menu wrong several times so they kept sending me that omelet since it was probably the default selection.)

Once I came home I started my own tradition of asking Mommy to make pancakes on Saturday.  Thanks, Mom!  I don’t indulge in pancakes anymore but Mommy sure did make a lot of them when I did!  We used a multi-grain mix from Trader Joe’s, and I loved variations, e.g. banana chocolate chip, pumpkin chocolate chip and orange (zest) chocolate chip.  Do you see a pattern?  Ply me with a little chocolate and I’m happy as a clam.  You just mash up a banana, add a spoon of canned pumpkin or the zest of an orange, throw in some chocolate chips, and you don’t even need syrup to have a smashingly delicious breakfast.

I think I was eating the pumpkin/chocolate chip variety when I told Mom about one particular night in the 3rd Hospital.  Mom and Dad had gone home and I was by myself in my room.  I took the opportunity to do some hard thinking about whether my situation was real or not.  I pressed the buttons on my bed so I could sit up, grabbed the pile of cards on my windowsill and settled back to read them.  I held the cards very close to my face and didn’t read all of the text – I was just scanning for references to my illness.  After I got through a few cards I was like, Okay, maybe this happened.

I wasn’t 100% convinced, though, so I put my cards back on the windowsill, laid back in the bed and peered out the window thinking, “This is a stupid dream.”  The “stupid dream” part was what I told Mommy about, and then I added, “But these pancakes help.”

I told you you could ply me with a little chocolate/pancake batter and I’d be happy as a clam.  Actually, I’m using the phrase “happy as a clam,” because that’s how Mom sized me up when we went to the doctor with Tanpo and I got to borrow a wheelchair.  I was whizzing around in the hallway and Mommy rejoined me after visiting the coffee cart.  She took one look at my smiling face and said, “You’re as happy as a clam.”

Another thing that makes me happy as a clam is rifling through Ai Ai’s pancake box.  She keeps a little Rubbermaid in the pantry full of fun things for the kids to put in pancakes on special occasions, e.g. mini M&M’s.  I usually bypass the pancakes and eat the treats straight from the box, but shhhhhh – that’s between you and me.  Ruthie told me once that sometimes her family would have pancakes for dinner on Saturday when they were growing up.  I was immediately drawn to that tradition since it involved one of my favorite foods, and it just sounded so cozy – I think everyone got into their pajamas and the idea was that it would be an early night since Sunday would be busy.

I’m going to post this on Saturday, so maybe you should try making pancakes for dinner.  The first time I made them myself was when I was an intern in OR, living with L.  I had to call JPAS (the king of pancakes) for advice and he happened to be cleaning his pancake griddle at that moment.  Even after my tutorial, L waited patiently for like another 90 minutes before pancakes and bacon appeared on the table.

Making pancakes in Oregon, eating them in the hospital, and enjoying them at home made me feel better.  As I told Mom, “…these pancakes help.”  Now that I’m off of the pancakes I try to let a lot of other things “help.”  If you’re reading this, you’re one of them.