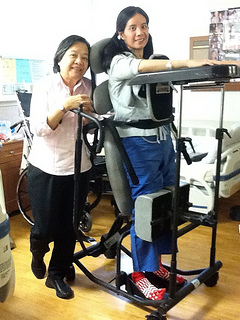 “The Vice” (This is obviously an early picture of me standing since I look way too happy to be lucid.)

When you meet new people it’s probably an automatic response to look at them in light of the people you already know.  So at the 3rd Hospital Mom and I referred to J as “the nurse who looks like C(Kh) but with red hair” (and not as tall).  Like many of the nurses who looked after me, J was super nice – he was the one who informed me that I had a huge bruise on the back of my right leg (probably from all the kicking I did when I wasn’t fully awake) and made sure my PEG site was healing okay once I got the feeding tube removed.  At this time PT2 had decreed I needed to practice standing in The Vice (the standing frame) every night so my nurses helped me into it after dinner.  R (JCJ’s mom) explained that standing is good for you since it lets your organs settle into the places they’re meant to be in.  I had no idea.  I suppose I had some sort of vague notion that the standing frame was good for me, but I just thought it was painful and tiring at the time.  One night J asked me if I had “a good stand” or something – it was a nice conversational sort of inquiry.  I responded by saying, “J, what doesn’t kill you, makes you stronger.”  That was the last time he asked me about The Vice.

That phrase was in my mind because it was the caption Ernie put on a video of Karine tickling Ezra with a LOT of enthusiasm and love a few years ago.  My brother was there to make sure the baby didn’t come to bodily harm, so don’t worry.  The resulting video was hysterical, and I thought the caption Ernie chose was so fitting.

One of the times my sibling’s summary of events wasn’t quite so fitting was when Ai Ai visited me in the 2nd Hospital and wrote updates about me for our kind praying friends on Facebook.  I read them a couple of months ago for the first time.  She heard me ask Tanpo, “Dad, tell me that thing again about Immanuel, God with us,’” and the poor girl was deeply touched, not knowing I was just stalling.  (Terrible, I know.) It was both fun and chilling to read Ai Ai’s accounts of what happened – these were things I have never talked about with anyone, and things I’ve thought maybe I imagined. But they were real.

One of them was a visit I enjoyed from the T’s.  R (Mrs. T) is the one who gave me Ed.  She had no idea what she was starting.  R was having a procedure done in a few days as part of her cancer treatment.  I was semi-lucid at the time, but I told her to be strong – actually, I don’t think I used any verbs.  I just remember saying “Strong,” and waving my hand for emphasis.  I also told her, “Don’t worry, N and J will help you,” (N and J are her husband and daughter).  I took a break from my encouragement agenda to peer over my bed railing and rasp, “J!  Look at your shoes!”  I think they were pretty little black platform pumps.  I had been contemplating such a purchase, but it’s on hold right now.  Even when very sick, I was still eyeing people’s shoes.  As I told S, (my “other” jeweler besides Mr. K), “some things don’t change.”

So the concept of “what doesn’t kill you makes you stronger,” applies to many things in life.  In my experience, however, I’m the only one I know (apart from Ernie) who uses that phrase.  I suppose people don’t generally wish to refer to things “killing” you.  A similar notion I’ve learned recently is the phrase, “Power up.”  A couple of PTs have used this one on me, e.g. the first time my left leg collapsed under me and PT6 caught my gait belt and hauled me up the stairs.

I think he was telling me I could do this (make it up the stairs without falling) and was also indicating that since he was on top of this situation I could and should exert myself as much as possible since the idea was that neither he nor I was supposed to be doing all the work.  He was right.  I’ve gotten the full work-up on my leg and the consensus is that there is nothing physically wrong with it.  So when I’ve heard the phrase “Power up,” I’ve been able to do whatever my PT is telling me to do.

So although I was half kidding when I told J, “What doesn’t kill you makes you stronger,” (re. The Vice) the half of me that was completely serious already subscribed to the “Power up” notion even though I hadn’t heard the phrase yet.  While the “Power up” idea appeals to my American ideal of pulling yourself up by your bootstraps, the contexts in which I’ve heard it have been ones in which I haven’t been working alone – a licensed professional has been right next to me.  In the same vein, but perhaps more figuratively than in RecoveryLand a host of people help me “Power up” daily – and trust me, I need it.  Who doesn’t?

Galatians 6.2  “Bear one another’s burdens, and so fulfill the law of Christ.”