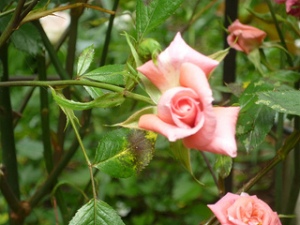 A rose in the “Healing Garden” at the 3rd Hospital

One of the most pathetic moments of my outpatient life came as we left Tuesday night meeting this week.  I was walking down the little sidewalk outside the chapel and Tanpo was a few steps in front of me.  I was very tired and my contacts were bothering me so I kept on screwing my eyes shut so I couldn’t see.  Added to my unsure steps, this was not a good combination, so I stopped moving.  A year ago I was using a walker but I never left the house after dark so I had never experienced a dark, sloping, leaf-covered sidewalk before, plus the increased instability in my eye movements makes me more unsure of myself than before.  Tanpo turned around and asked if I was okay.  I shook my head “No” and he came back and got me so I could make it a few more feet to the car.  Once I was safely seated and out of the wind I felt better.

At my last Eye Eval OD3 emphasized to me that my vision would get worse before it gets better.  He actually explained this point twice since I totally missed (or edited out/ignored it) the first time he said it.  I have heard people say that many things in life get worse before they get better, so I was not overly surprised.  I was rather disconcerted, though, when it started happening.  I checked with OD4 and the destabilization of my vision coincided with the time period most other patients reported “worsening” so I was glad to hear that at least the deterioration was timely.  I’m also encouraged that things are happening as foretold.  This combined with the fact that all the weird tests including the space goggles that measure your eye movements when you read indicated that the VT is waking that left eye up (after a lifetime of me ignoring it) makes me okay with going downhill for now – it’s an expected prelude to going uphill.   FYI for me, “deterioration” means increased jumpy eye movements, more dizziness and occasional nausea.  It’s likely not as big of a deal for other folks, but combined with my other impairments its not a fabulous combination.  Other people, like me, just decide the discomfort/inconvenience will be worth it.  Thankfully I haven’t been nauseous in over a year.  Then I rode around with a plastic bag hooked onto my wheelchair for a week.  Now I don’t have anywhere to hang an airsickness bag so I just take my chances.

Things weren’t looking too good this week at Therapy but I held it together and did not toss my cookies.  PT37 is versed in vestibular therapy and brain injury so when I told her about my vision situation she noticed the extra eye movements right away.  So we’ve been doing more vision exercises while I sit in a chair or try to keep my balance on a Physio Ball (one of those large inflatable exercise balls).   Notably I initially scored an 84/100 on the “Diziness Handicap” quiz at Rehab (higher numbers are bad), so getting dizzier is undesirable.  (Update 3/13:  My DHI score has increased – I think I was being too “hopeful” the first time I took the test.)  I would have scored higher, but I answered “No” to the question, “Are you concerned that people will think you are intoxicated?” since most of my friends know I don’t drink (I flush very badly, among other reasons).  I do, however, look like a drunken sailor most of the time, not that I’ve ever seen one.  (Hey, Lt. Cmmdr. R, wanna volunteer for the job?  Just kidding. I do not endorse intoxication – public or otherwise.)

On Tuesday PT37 had me spin around on a swivel stool and bounce around on a P. Ball (“Bring your feet closer together.”  “That’s a lot harder.”  “I know – that’s why I asked you to do it.”) while doing vision tasks.  Direct quote from PT37 to PT42, who was sitting next to me:  “Be ready to catch.”  I think she said we’re trying to overload the system.  It’s overloaded, I promise!  Does it make it true if I say it out loud?

The fun did not stop at PT.  On Wednesday I saw D rolling a big red P. Ball over to the corner of the VT room.  “I’m so glad that’s not for me,” I thought.  It was for me, after all.  OD4 made me take my hand off of the desk, asked D to stay close by as I did “Sticks ‘n Straws,” and then he asked him to put his foot behind the P. Ball.  I thought he was going to stabilize it, but no no, D asked if he was to “rock the boat” and OD4 affirmed the rocking idea.  After a few gentle nudges from D OD4 decided to come over and shake things up more vigorously.  I stayed on.

We then moved on to the card game I described last week (Post 35. “Pattern Play”) and OD4 introduced a new kind of card and a 4th category.  He also rested his foot very casually on the P. Ball like people do when they are thinking.  This position served the purpose of allowing him to rock the boat while I was concentrating on the cards.

So this week was full of “fun” – and I didn’t even mention anything about Pool Therapy, although I assure you I was laughing when I wasn’t falling asleep.  That’s another thing about this “worse” stage – I think it makes me sleepier.  I was already extremely tired all the time before this, but seriously, this “sleepier” thing is interfering with my exercise etc. schedule.  Like last week I sat down on Weezy, my recumbent bike and my feet slipped off the pedals since I was falling asleep.  PT37 told me she was going to get me some toothpicks to keep my eyes open during the session and when it was over she told me to go home and nap – “That’s an order.”

Oh well – there are worse things in the world than having to take a nap and I am thankful that I have the time and place to sleep if I have to.  But it will be so nice to be free from this kind of restriction when I’m well again.