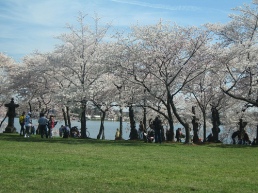 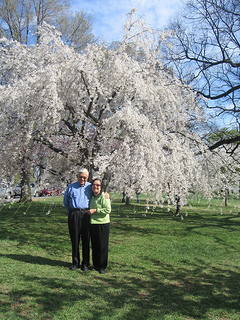 This week I got I special note in the mail from JEPK’s mom, and she enclosed the gift of some beautiful cherry blossom stamps – sorry I forgot to photograph them!  I love cherry blossoms.  There are trees that bloom nicely outside of the parking garage at work so when I got back from Africa in late March ’11 and was working from D.C. I asked my colleague C, “Did I miss the cherry blossoms?” as we IM’d one morning.  She checked on her daily walk (I used to cross paths with her and J occasionally) during lunch and reported back to me that I had not missed them.

When I got home I slept downstairs in front of the T.V. and I was very confused about the things I saw on the news.  I was conscious of the Royal Wedding (I think the nurses had been talking about it so I dreamed about it), but everything else that happened during the larger part of April-May 2011 I missed entirely since I was asleep.  Even when I’m not asleep I live under a bit of a rock, but getting sick just exacerbated things.  One day I couldn’t stand it anymore so I asked, “Mommy, they caught Osama?”  She confirmed that yes, that had happened before I woke up.

A few days ago I heard about the car bombing even before it hit the airwaves.  I didn’t miss anything since J told me about it.  A couple of days later her sister RSKL talked to me about it, too.  It had been particularly unsettling since there is a large K contingency in the Mother Country, and this act of violence had occurred on the street where a cousin who had recently visited us here was walking on a work break shortly before the explosion.  Thank God she was spared.

A couple years ago another family at church lost a beautiful young niece/cousin in another car bombing.  Our loved ones are often not spared and those who remain must mourn and keep on living life.  For many people that life is lived within a conflict zone that doesn’t exactly invite peace of mind.  But home is home, and peace of mind must often be Divinely superimposed on a situation.

A few years ago Mr. R (K&I’s dad) told me that nothing was going to happen to me that God didn’t know about.  Mrs. R (their mom) also told me that no one was going to “tie my bow” (like when you put a ribbon on a present) better than the Lord would.  I was really stressed out (to the point of psychosomatic symptoms) and was afraid of all the messy loose ends I was facing at the moment.  In retrospect I’m amazed at how they told me these things with such conviction.  “How did they know?” I asked myself.  But the answer demystifies their adamancy:  Experience.  They spoke with certainty because of their own experience.

Several years ago when Dad had cancer I cried in the parking lot at church but tried really hard to hold back the tears because I told my friends, “I don’t want to indulge.”  But when she saw I was really struggling, JEPK stepped forward to give me a hug that said I could cry all I wanted and it would be fine.  It was the kind of comfort born out of experience – the kind of hug only someone who has known great familial sickness and sadness can give.

When I was in Burundi I met some people who had every reason to be angry and bitter, but had chosen not to let the violence that had robbed them as younger people poison their adulthood.  They were now choosing to pour out their lives to serve “the least of these” of their country and I was amazed at how quietly and resolutely they worked after how much they had endured.  The war years formed a generation’s collective experience and the people I’m thinking of chose to take their experience of God’s grace in the midst of tragedy and applied it to their lives as they looked to a brighter future.

So for all you folks in the Mother Country, thank you so much for praying for me over the past ~18 mo.  Now it’s my turn to pray for you.  And I’m not the only one over here who thinks of your anxiety and prays for your peace.  There are so many of you over there that your collective experience of God’s grace must be astounding.  If I could travel I’d go visit you and ask you to tell me about it over a very large meal :).